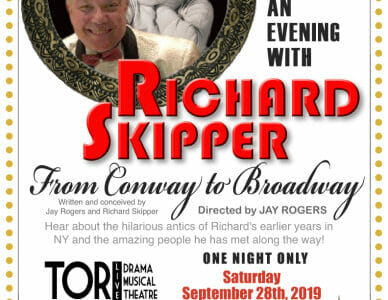 An Evening With Richard Skipper: From Conway to Broadway
Richard Skipper (or Ricky, as he is known to Conway-ites) was born in Conway South Carolina in 1961. In 1974, he made his debut with a walk on in Mame with The Theatre of The Republic. The Fairy Godmother of TOR, Miss Florence Epps took “Ricky” under her wings and within a few years he was playing larger roles. Ricky also made up his mind on August 5th of 1974 that he was going to go to New York five years from that day to be in show business!
AND he did! On August 5th, 1979, at the age of 18 and right out of high school, he flew one way to New York with $500.00 in his pocket…although he never had flown before, really didn’t know anyone in NY, and had never really been outside of Conway! That was 40 years ago!

Ricky/Richard will be returning to TOR for one night only to share the hilarious and sometimes poignant adventures of those first years of struggle.