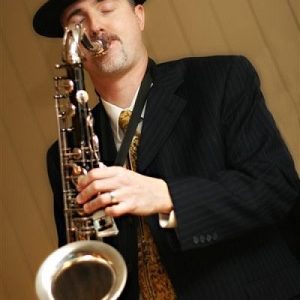 Pam, who hails from Louisiana and Texas but now lives in Pawleys Island, began singing jazz in 1974 in Paterson, NJ at Gulliver’s. It was a good place to begin because she met and sang with Chuck Wayne, Joe Puma, Gabor Zabo, Joe Morello, Jack Six, and Bob Ackerman. The later of these fine musicians she decided to keep. Pam and Bob have They been married and working together for 25 years, and have 8 recordings together to this date.

Dan returns to the Winyah’s stage after a engaging performance with the LBS Jazz Quintet. Saxophonist, composer, and band leader Dan O’Reilly is a member of the music faculty at Coastal Carolina University where he teaches saxophones, jazz, and popular music.  His soulful saxophone has been featured on the internet radio program “Born in the Carolina’s Live” as well as on “Southern Style” and “Coastal Today” television.  Dan has performed extensively at the House of Blues, and has appeared with the Four Tops, the Temptations, Lou Rawls, and Frankie Valli; in addition to opening for such artists as B.B. King, Delbert McClinton, and the Doobie Brothers.